Stamens definition – Androecium is the male reproductive component of a flower and its individual members are the stamens which are the microsporophylls.

Filament – Stalk of the stamen that bears the anthers.

Anther – 2 or 1 lobed structure borne on the filament and produces pollen grains in it.

Connective – The terminal portion of the filament which connects the anther lobes.

Each stamen has a stalk, called the filament and at its top a sac-like structure, called anther. Each anther of a flower has normally two lobes known as anther lobes. The anther lobes are connected by a tissue known as connective. Each anther lobe has two chambers called pollen sacs or microsporangia. Pollen sac contains pollen grains i.e. microspores.

The number of constituent stamens in an androecium varies from one to many. In a floral whorl the stamens i.e. microsporophylls are inserted in one or more whorls, or stamens may be arranged spirally on an elongated thalamus as in Michelia champaca (Magnoliaceae).

Androecium is said to be diplostemonous when stamens occur in two whorls, those of outer one alternate with petals (antisepalous) and the inner whorl alternate with sepals (antipetalous). Examples — Cassia fistula (Caesalpinaceae), Lythrum sp. (Lythraceae) etc.

Stamens in an androecium may vary in length. In tetradynamous androecium, common in Cruciferae, the stamens are in two whorls ; outer two are shorter and inner four longer as shown in formula A2+4 or vice versa.

In didynamous androecium, 4 stamens are in one whorl — the posterior pair is shorter than the anterior or vice versa as shown in formula A2+2. This is seen in families like Labiatae, Acanthaceae, Scrophulariaceae etc.

In a whorl, when stamens of different lengths occur, the androecium is termed heterodynamous e.g. Cassia sp. of Caesalpinaceae.

Stamens may vary in number as follows:-

(i) Normally the number is equal to the number of sepals and petals i.e. isostemonous. 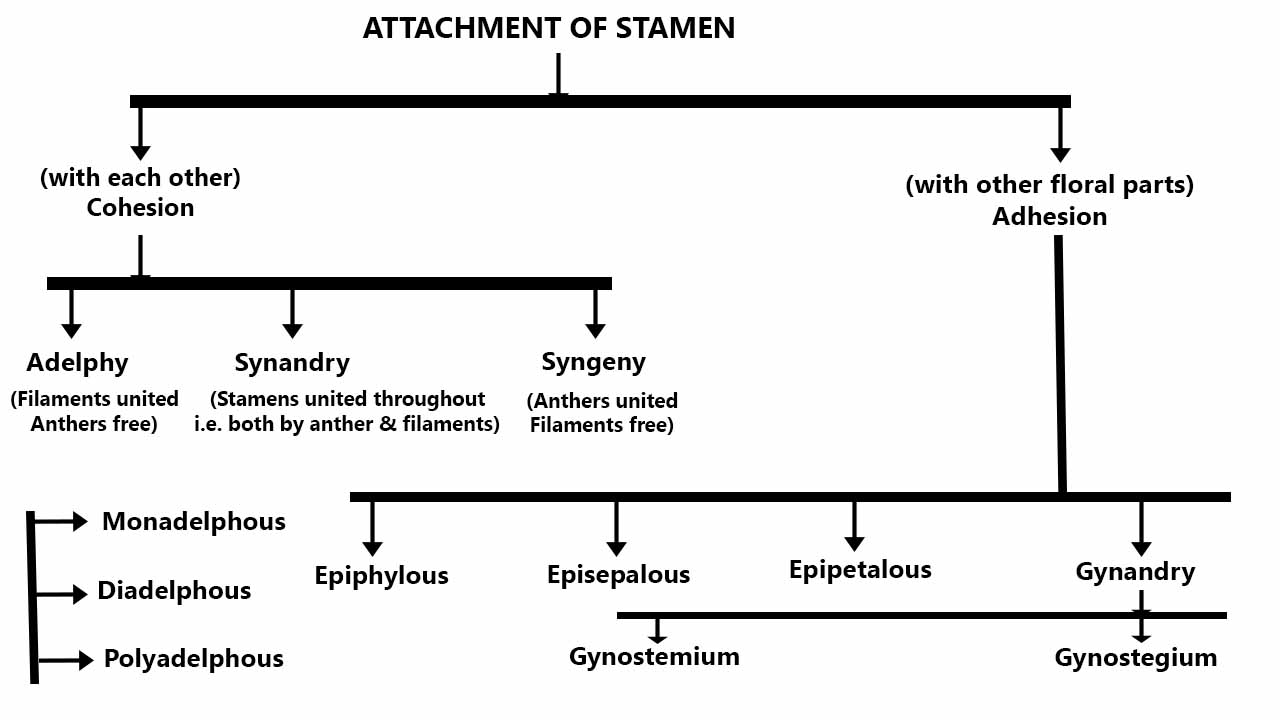 Union of stamens may be with other unlike members such as petals or gynoecium which is termed adhesion, or union may be among themselves — either free member of stamens or their parts are united together which is termed cohesion.

A. ADHESION OF STAMENS

(a) Epipetalous – When stamens are adnate to corolla i.e. petals. Examples – flowers of many families like Acanthaceae, Scrophulariaceae, Verbenaceae, Labiatae etc., in almost all flowers having gamopetalous corolla.

(b) Epiphyllous – When stamens are adnate to perianth leaves as seen in monocotyledonous families e.g. Liliaceae, Amaryllidaceae (Polyanthes tuberosa), etc.

B. COHESION OF STAMENS

Here stamens may either be united by their filaments (adelphy) or by their anthers (syngeny).

(a) Monadelphous – Here all the stamens are united together by their filaments to form one bundle while the anthers are free as in Malvaceae, Sterculiaceae, Meliaceae, few species of Euphorbiaceae, and Papilionaceae etc.

(b) Diadelphous – When out of ten stamens nine are united forming one bundle and the posterior one remains free as second bundle (9 + 1), or stamens are united in two distinct bundles of 5 + 5 (Smithia sp., Papilionaceae), the androecium is called diadelphous. Examples are found in most members of Papilionaceae.

(c) Polyadelphous – When in an androecium the stamens are united by their filaments to form several bundles, androecium is called polyadelphous. This type is found in Hypericum sp. (Guttiferae).

(d) Syngenesious — Sometimes in an androecium the filaments are free but anthers are united to form a tubular structure round the style, such condition is known as syngenesious. This is found in all the members of the family Compositae, e.g. Helianthus annuus (Sunflower).

(e) Synandrous — When stamens are united by filaments as well as by anthers to form a compact body. This is seen in male flowers of Cucurbita sp. (Cucurbitaceae).